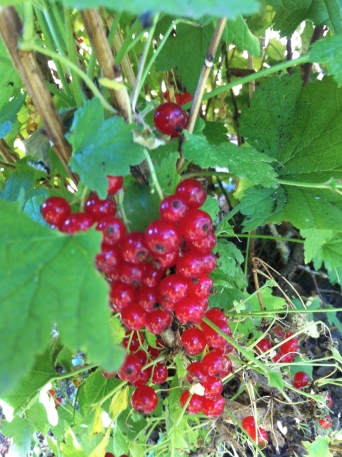 It is very slow picking, and I ended up with about a cup of each color.

The red ones are the more tart. In the great tradition of death-defying culinary experiments I threw them into yet another batch of scones.

I will characterize these experimental scones as beyond awesome. (Recipe is at the end of this exciting post.)

With rampant confidence I then put the black currants in a recipe of banana-nut bread. They taste like tiny blackberries in there, and make the bread polka-dotted which is pretty and very fun but I forgot to take pictures and then we ate it all, sorry.

At this time I must confess to Currant Bush Neglect. Sometimes, in past summers, I have accidentally spilled water on them when I was really watering the tomatoes, but other than that they have been foraging, if plants forage. I suppose the roots can forage. Anyway they got nothing from me except curiosity as to why Mr O bought those bushes anyway.  But now? Why now I love them, deeply. Never again will they be passed by like strangers on the street. They are accepted. And they better produce.

This morning there was thunder rolling to the south. It made Max go completely nuts, barking and running around in the yard, ready to grab the pant leg of Zeus or whoever was causing all that noise. 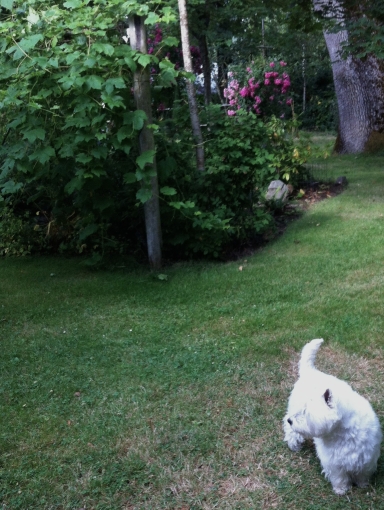 I like the clouds moving in, and the timpani in the sky too. You can’t buy tickets to entertainment like this.

The Iphone rumor was that we might get some rain, though the temperatures are to continue near 100 F for the next few days which is a serious heat overage in my opinion. But here in Western Oregon it always cools at night, dropping 40 degrees or so this week, and in the early morning I open all the windows and doors in the old house and go outside and water the plantings until the well has a fit and cuts off the flow for a while.

When the outside world starts to simmer I close up the house, which includes drawing together the exterior wood blinds upstairs to keep out the heat. It darkens the bedrooms with cool green shade which makes the summer ceiling-corner cobwebs less noticeable.

I could hear rain coming when I went outside to water plants in mid-morning. There is a huge, metal-roofed barn across the field to the south, and the approaching rain made such a pounding roar on it, I feared it might be some kind of impossible summer hailstorm coming, or maybe the end of the world.  I mentioned this to Max. “We’re all gonna die,” I said.

Then we went inside and stood by the open back door to watch. 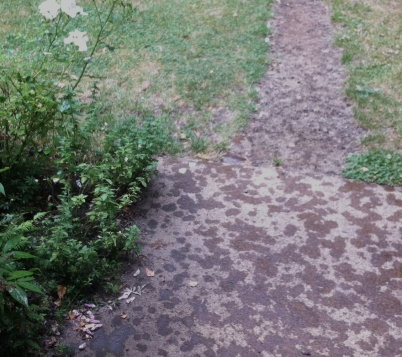 The noisy shower arrived with the biggest raindrops I’ve ever seen. Maybe two teaspoons of water to a drop or something like that. We were amazed, but not dead after all.  So Max calmed down and took a nap. He even slept through the rest of the thunder.

Here are the scone ingredients for Strawberry Scones  as found on a blog wonderfully called  Confessions of a Tart. The quotes from there are in italics. I added some not italicized things–– the mixing instructions are my version.

1 cup strawberries (or other fruit)

Put all the dry ingredients in a bowl, mix it with a whisk then cut the butter into it. Then stir in the fruit, chopped first if needed. Last is the vanilla and the cream.  Stir again to make a soft dough.

Pat this out in a (3/4″ thick) round on a floured board,  then cut the circle into 6 or 8 triangles and bake on an ungreased sheet at 400 F for about 10-15 minutes. Sprinkle the scones with sugar (for sparkle) and bake another 15 minutes or so until lightly brown and springy to touch. Don’t overbake!

(If a miracle occurs and you have some left you can freeze these and reheat for 10 minutes or so at 350 F.)

31 Responses to Currants, and rolling thunder