When to tie plants into knots –vote here

Max said I should discuss this issue.

I hate it when the dog is right.

Spring progresses here in western Oregon and grape vines are growing like mad with new shoots firing off like rockets into space.

Now, it may be that grape vines have Growth Plans built into their DNA, complex possibly-computer-asssisted drawings with “circles and arrows” sort of like what Arlo Guthrie sang about…  But to me it looks like an every-vine-for-himself philosophy, with new shoots zinging off the trellis in all directions in some kind of botanical explosion with no thought for tomorrow or for adjacent trees or even low-flying aircraft. 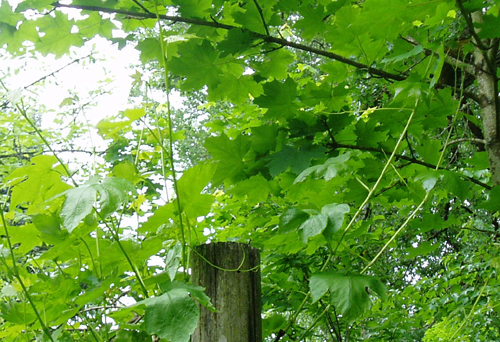 One’s first thought is, “Where did I put those pruners?” But this is a rare case where whacking is not in order. Because I happen to know (don’t ask, I just do) that if you prune a grape vine in spring it will bleed.  Creepy clear grape vine blood will drip-drip-drip for days, changing what was a chaotic green explosion into a graphic murder scene.  (I knew a woman once who put band-aids all over the grape vine where it bled after she cut it and NO I WAS NOT THAT WOMAN.)

Now, you may not realize it but I’m an ordained Smarty Pants Gardener by way of the Universal Garden-Life Online Certification site –I have the certificate, somewhere, and the Paypal receipt for $4.95.  (NOT to be confused with the Master Gardener program where you actually learn all about gardening but gosh it takes a lot of time compared to how I just clicked that pay button.) So anyway I felt it was desirable and also somehow expected that I would intervene with the delicate subtle guidance which wise gardeners have shown for eons if not longer if anything is longer than eons:

And if you think about it, those tendrilly things the grapevines grow all over the place are perfect for this management plan. They LOVE to twine around one another in a supportive embrace; to become one with their neighboring shoot, to sacrifice airy independence for the sake of unity and also so they are not blown off to Seattle in the first semi-tornado. I’m just helping them twine is all, because they need it.

So WHY does Mr O say, “I see you’ve been tying the grape vines into knots again,” in a tone exactly like it was some kind of perverse sick habit on my part?! 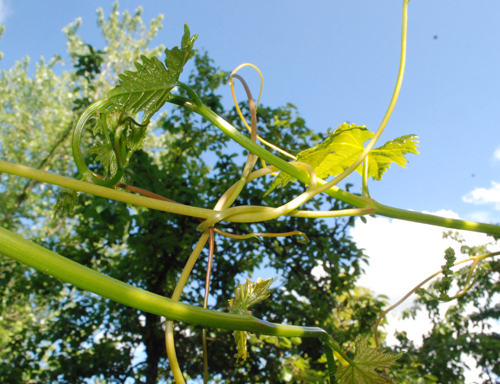 Does he offer an alternative?

Are the manic vines already climbing into the maple tree?

When left on their own do the crazed shooting shoots make the entire arbor look like it’s having a Bad Hair Day?

I feel certain you have an opinion on this…

60 Responses to When to tie plants into knots –vote here