Fruit, and an amazing crop circle

Just for fun, the Fruit Gods did something to the Italian prune trees this year, and there was a kind of tidal wave of blue plum fruit. 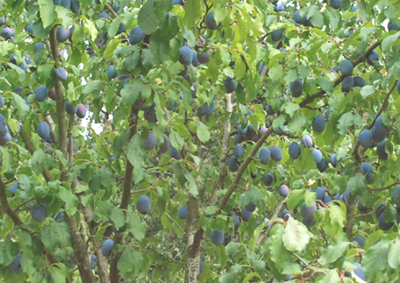 We must preserve it all, Mr O declared.

There’s nowhere to put it, Linnie responded. (She thought of the kitchen, where the cupboards offered no space.)

We can put it in a basement cupboard, Mr O suggested.

Don’t be ridiculous, Linnie proclaimed. We can’t put nice new jars of food into the dark cobwebby chaotic needing-cleaning basement. But, she added, we could bring that cabinet upstairs.

They had talked about that cabinet before. It is what could kindly be called a “primitive” piece. It came with the house and was doubtless handmade by some previous inhabitant for storing jars of previously canned food in a much previous time.

Mr O thought the cupboard belonged in the cellar for miscellaneous storage, but the pressure of the vast prune crop convinced him. OK, he said. Let’s bring up the cupboard.

Extracting the cabinet from the basement was a horrific job. Somehow it was too tall to bring up the inside stair–it had to go up the outside stair.  And with great difficulty. I won’t go into the details but it involved a winch, a piano board and rollers.  (No one died.)

Then, in the cold light of day, both Mr O and Linnie could see the desperate extent of the cabinet’s need for refinishing. 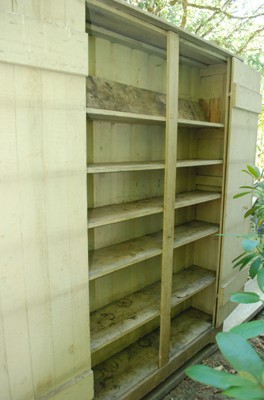 You paint it, Linnie suggested.

But no, Mr O had work to do for paying clients. Damn…

Deep in a shelf corner there was a spotted little label with a woman’s penciled writing: Strawberry Jam, June 1941. It had always been a fruit cupboard. 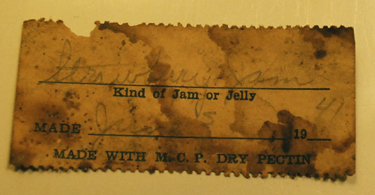 So yes I painted it– primed white, then shiny white inside and dark green outside. I judge it was about a square mile of surface, counting all the shelves and coats of paint. A lot of work for a person who has given up painting. 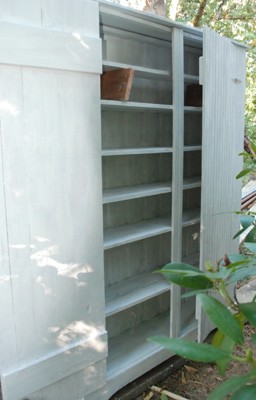 Then we canned millions of the little blue fruits but they didn’t fill up the immense cupboard. Now we are canning white fruits (pears) and yellow fruits (peaches).  “Living off the land” except we bought the peaches. Outside I see squirrels running around doing the same sort of stocking up. At least they don’t have to paint their trees. 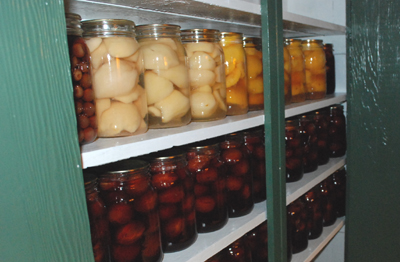 I also cut the greenhouse basil and froze some pesto, at which time there was a little frog, Trying Not to be Seen. 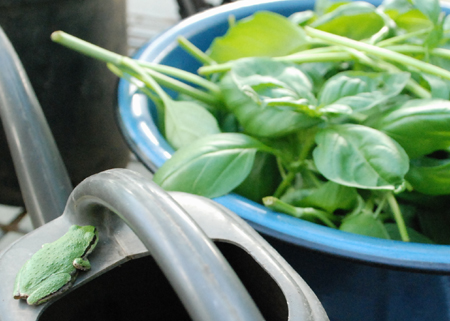 We made  jam and we chopped some to freeze for crumble, which Tillie insisted must include 2 tablespoons of Chambord raspberry liqueur mixed into the fruit. Excellent. 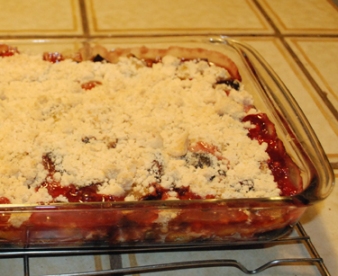 That’s it for all the normal, healthy news.

I went outside today, to water a border. My view over the picket fence, a half mile or so to the south,  revealed a very creative crop circle effort by the hayfield’s farmer. 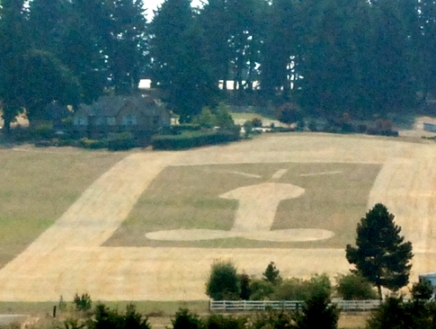 Remarkable, don’t you think? Clearly, it’s a…lamp post. Or a nuclear bomb. Or a fountain. Or something. 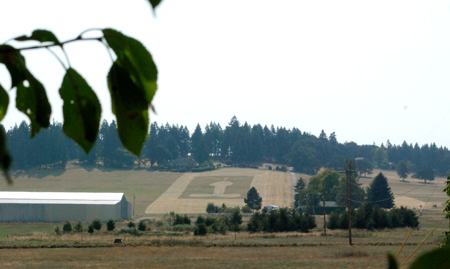 38 Responses to Fruit, and an amazing crop circle