It was my first plant shopping trip this spring and I made an impulse purchase of a perennial called Anemone sylvestris. Now, remembering my Latin (which I just learned), its name means “anemone of the forest” –nice.

In the past I’ve tried and failed to grow a sweet native-Oregon wildflower called Columbian windflower or western white anemone (Anemone deltoidea). So when I found this small spring-blooming white Anemone sylvestris (what’s its common name? doesn’t it have to have a common name?), it was not the windflower I wanted, but maybe one that would live. For sale. Looking pretty. So I bought it.

Then I came home and read about it online after which I very nearly composted this plant.

Remarks ranged from “needs a bit of room to spread” to “invasive is putting it mildly.”  (Turns out the common name might be Hellish Anemone or just Big Mistake.) Having dealt recently with the lesser celandine eradication drama I was hugely wary of  introducing to my garden another selfish thoughtless bully of a plant. 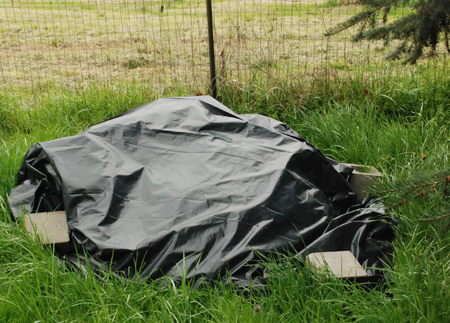 Then there came a warm sunny day and OMG I planted the Anemone sylvestris anyway! 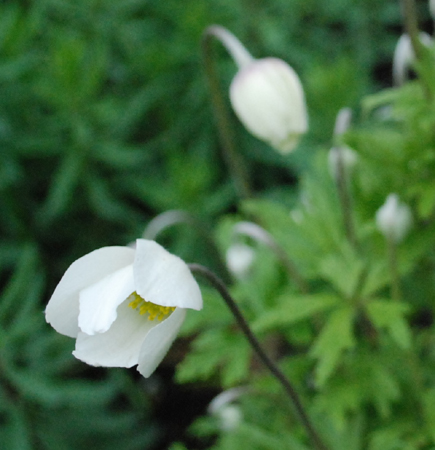 I put it in the clay earth (don’t say “dirt” unless you want Kininvie to scold you because in Scotland you say “soil” and dirt is something else and very unpleasant), and the clay is usually enough to slow any roots if not kill them altogether, but there are also dark rumors about the seeds…

So um, do you maybe know anything about this plant? Is it safe? Will I rue the day I handed over the $8 for it? Why doesn’t it have a lovely common name like a decent law-abiding plant?

(There is still plenty of vacant space in the burial mound, just say the word.)

Update on Anemone sylvestris:  I was convinced by all the positive comments (see below) and I am keeping this cute plant!

In the dangerous food department, I have discovered rhubarb crumble.

This dessert is especially dangerous for the rhubarb plants which I suppose need to keep a few stalks for themselves, but it is also dangerously addictive which I expect is why my mother never made it for me. (That plus she’d likely never heard of it.)

I discovered rhubarb crumble on some favorite blogs and then researched this simple-looking dessert online. What could make people say such rapturous things about it? Ah innocent curiousity! There are many recipes. I’ve tried several. Here’s an easy one I like.

You mix this up in a bowl:
2 cups of cut rhubarb (1″ pieces)
2-3 tablespoons of strawberry freezer jam (or some sliced fresh strawberries which I don’t have right now)
1/2 cup sugar
3-4 tablespoons of flour
Put the rhubarb mix into a baking dish.
Then mix 1 cup of flour, 1 teaspoon baking powder, 1/4 cup sugar
Melt 1/4 cup of melted butter and stir it in until you have little pebbly mix.
(Sometimes I add a little vanilla.)
Spread this flour mix on top of the rhubarb and bake at 375 degrees F. for 40-50 minutes.

Warm rhubarb crumble is actually enhanced by adding homemade ice cream made with a large dose of brandy. (Surprise.)

Mr O shares my addiction for RC (rhubarb crumble– in code) and really we may just go completely to the Crumble Diet, forsaking all other foods until the rhubarb row is dead and we have to stop.

There. Don’t say I never warn you about stuff.

47 Responses to Flirting with danger