It’s taken about five years for me to finally commit on the solar yard lights.

I used to read about them online now and then, and everyone seemed to be whining about how dim they were which made it sound a lot like they didn’t work.

Then lately I have been seeing them at Costco and then at my favorite Ace Hardware store. (Yes I have a favorite hardware store, where the employees probably don’t carry guns and they have incomparable greeting cards and  a terrific garden section to look at while the paint is in the shaker machine.)

The tipping point on the solar lights came when the Plant Goddess bought some and she and her consort were both nuts about how they look in the garden. Honestly she has to sit up late now waiting for the darkness so she can gaze upon the lights… (Could they be a sleep-deprivation health hazard?) 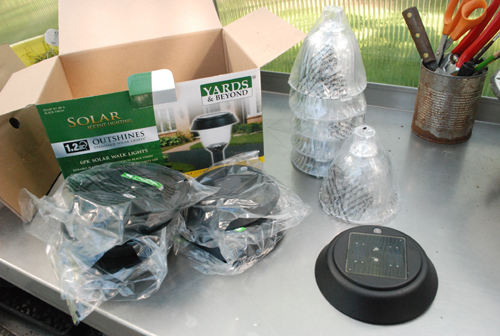 So, I bought a box of solar lights at the Ace. Actually TWO boxes, with six in each, so I have a dozen, like doughnuts. They produce 1.2 lumens each ( brighter than doughnuts).

I hope that 1.2 lumens means something to you. I just this minute read it on the box and I’ve had them for a week.  I guess it’s a lot more than for example half a lumen…

Then is the fun part of carrying the lights around in the garden and saying to Max, “This might be a cute place for a light. Or how about over here by this fern?”  And sometimes, “Max no, don’t pee on the light!”

I was afraid I wouldn’t like the techie look of the lights among my precious plants, but they sort of disappear in the daytime. (The lights not the plants.) (Except for lettuce sometimes.)

I like to take pictures, but I have never ever got the camera issues sorted out when it comes to tricky photography. To get these night shots I spent hours with the inch-thick instruction book that is supposed to explain Mr. O’s fabulous but frighteningly complex Nikon digital camera.

I have grasped that there are really just two settings, how big the shutter opening is and how long it’s open. But then there are layers of programs and choices and, to my mind, the book is singularly unclear about where to find the settings it says to set. And EVERTHING is represented by some obscure little icon that is not memorable so you have to look up things and then look up more things in order to implement the first things and when you get all the things looked up you forget what you were trying to accomplish twenty minutes ago when you were wondering about something simple like how to set the damn shutter speed.

I adjusted so many settings that in the end the camera was automatically shooting three images in a row (no discussion, three images, clicka-clicka-clicka) and they were all utterly black.  Why would a camera decide to do that? I had to work like crazy last night just to undo most of what I had done to that camera before Mr. O gets home from San Diego tomorrow. (Just so you know what I go through for you.)

Here is another minimal slightly blurry representation of an adorable little light in the garden at night. 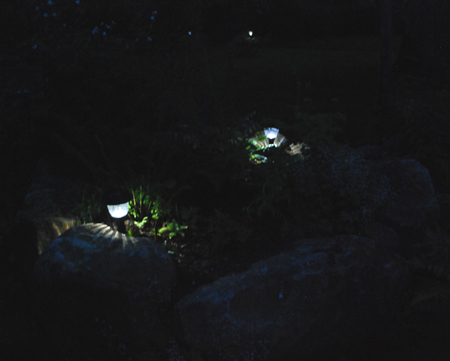 Maybe if you squint when you look at this…

I would love to capture a vista of the darkened garden with the lights sprinkled  (as the Plant Goddess says) like so many bright fairies among the plants (what are these, party fairies, out all night, raising hell? are they responsible for the garlic damage?), but when I take that vista picture it comes out totally dark or totally dark with a few bright dots that look like an unfamiliar constellation that you can only see from maybe Mars.

So after I made the Big Investment in lights I checked into the net again to see what the whine is now.  It sounds like these lights will last two or three years, that bugs make them into condos, and that it is about as expensive to replace the batteries as to buy whole new lights. (Nothing’s perfect.)

I found lots more mostly positive discussion at a site called Detect Energy, with this post title that I just love:

(But you know everything and everybody poops out eventually. Really you just can’t worry about it.)

Now I have to go take a nap so I can stay up late and see my awesome sparkly garden lamps lighting up the night, because the truth is that I adore them.  (I think they might be good fairies…)

Unpublished novelist seeks therapy in gardening. Westie assists.
View all posts by linniew →
This entry was posted in stuff for your garden that isn't plants, The Plant Goddess and tagged Madrona Ace Hardware, solar garden lights. Bookmark the permalink.